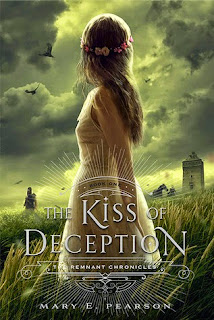 The Kiss of Deception

"Today was the day a thousand dreams would die, and a single dream would be born."

Lia is the princess of the kingdom of Morrighan. Traditionally, Morrighans believe that First Daugther's have a "gift" and are highly treasured. The book opens with Lia being betrothed to the prince of Dalbreck and it is time for their wedding. Lia and her chamber maid Pauline, make an escape just before the wedding is due to take place. Stealing some royal horses and fleeing into the forest.Together, the pair make their way to the small village of Terravin, and they work as humble maids at the local inn and tavern.

The reader are introduced to the three main kingdoms, Kingdom of Morrighan, where Lia is originally from. The Kingdom of Dalbreck, where the Prince who Lia was supposed to wed originated and The Kingdom of Venda, well known to be enemies to both Kingdoms.

"“It can take years to mold a dream. It takes only a fraction of a second for it to be shattered.”

This story goes between switching Povs with Lia, Rafe, Kaden, the assassin, and the Prince.I'm a fan of multiple points-of-view in a story. i love knowing what each character is thinking and feeling. You don't know who is the prince and who is the assassin. I tried to guess and i was wrong, boy was I suprised with the reveal later in the book.

I loved Lia's character .She is brave, not afraid to stand up for herself or her friends. Her smart mouth and snarky attitude made me instantly connect with her. She is also a very caring and loyal person.

There is sort of a love triangle, Each boy has strengths and weaknesses that made it really hard not to cheer for both of them. Raff,He is a very confidant person and at times he was a little moody. He has an extremely hot and cold relationship with Lia. Now kayden, is the opposite of Raff.He is very reserved and at times comes across as shy. He has impeccable manners and can be very charming when he wants to be.

Everything about this book was beyond amazing!! It was full of adventure, romance, emotion, and suspense.One of my favorite things about it was that there were some awesome plot twists that took me completely by surprise. I would definitely recommenced THE KISS OF DECEPTION, especially to anyone that's looking for a rich fantasy, with a touch of originality, and mystery to keep you enthralled until the end!

Posted by Betweenfoldedpages at 5:53 PM No comments:

src="http://www.bloglovin.com/widget/bilder/en/widget.gif?id=13257677"> Email ThisBlogThis!Share to TwitterShare to FacebookShare to Pinterest 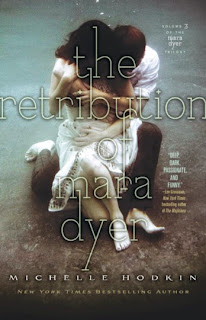 The Retribution of Mara Dyer

"The villain is the hero of her own story"

That was an emotional roller coaster. Everything about this book was perfect!!Sadly this is the end of the story of Mara and Noah. Mara wakes up not really knowing where she is or how long shes been there. And Noah is missing, Mara having been told he died in the collapse of Horizons dose not believe them and why would she they have locked them up and done expiriments to them. The book get pretty intense and bloody right away,haha i love it , love the writting.

Mara and Jaime get more one on one time in this novel, Jamie with his smart mouth remarks. He plays a bigger role , and he gets to use his powers to help his friend. Daniel, Mara's older brother also plays a bigger role this time around. made me nervous when he first showed up, I'm glad it didnt play out the way I thought it would. Stella is a sad excuse for a character. i hate her so much someone should just slap her across the face. Mara saves her from the rapist and instead of thanking her Stella is scared of her and accusing her of being pregnant. Our questions were starting to be answered. who controlled Dr. Kell? Who made Horizons?

Jude is freakishly insane. He's like a rabid dog that needs to be put down, yet he has a second of a redeeming moment only to lose it again to his rage. We get more of a backstory on Jude and Claire.

Near the ending of the book they finally find Noah and its heartbreaking. He is the complete opposite of Mara made for good to overcome evil.He is faced with some serious choices and no matter what he chosses he will have to live with what hes done. Mara and Noah's relationship is pushed to new bounds. Mara is shadow and Noah the hero , and there were destined to kill each other. And in this book we get a few chapters from Noah POV which was amazing to know what he was thinking and feeling.I was on the edge of my seat near the ending and I couldn't get enough, so sad it was ending.

Mara is my favorite character she isn't your typical good girl heroine, she is selfish,needy, haha and kinda on the crazy side, which makes me love her even more. She comes to terms with who she is and accepts that she actually likes who shes becoming.

The last few pages were so sweet and romantic. Where we get Mara and Noah sexy time, it switches back and forth from Mara and Noah's POV during this scene and its just so amazing.


"My name is not Mara Dyer, but my lawyer told me I had to choose something.


Posted by Betweenfoldedpages at 10:50 PM No comments: